“If you go slowly enough, six or seven months is an eternity—if you let it be—if you forget old things, and learn new ones. Even a week can last forever.”
Rick Bass, Winter

"In the midst of winter, I finally learned that there was in me an invincible summer."
Albert Camus

The other day one of my talented writing students, Lettie, sent me a short essay she'd written for her senior seminar on food-writing.  It's being published in our campus literary magazine, The Laurentian, but I liked it so much, and it's so much in the spirit of this blog, that I thought I'd post it here too.

How to Eat an Orange
by Lettie Stratton
How does a good Buddhist eat an orange? I had never thought about it. Professor James Boyd, or Boydo-Sensei as we fondly called him, asked my Semester at Sea World Religions class this very question one morning as we floated on the Pacific, headed for Kobe, Japan. It was especially blustery outside and the frail girl next to me had just fallen out of her desk due to the rising and falling of the ship. Meanwhile, we were learning about Buddhism. I was sitting in the front row, peeling an orange that I had illegally taken from the dining room only moments before. Boydo-Sensei saw me struggling to remove the orange rind and launched into an impassioned story about his days as a student of my new favorite religion.
Boydo-Sensei was in a café, drinking coffee with a Buddhist man who he said was far wiser than himself, although I find it hard to imagine anyone wiser than Boydo-Sensei. Beside Boydo and his Buddhist teacher, there was only one other person in the café: a monk—sitting behind them and eating an orange as he read the newspaper. Once in a while, the monk would take a sip of coffee from the mug near his hand that wasn’t busy flipping pages.
Boydo’s teacher said, “Look, James, look—bad Buddhist.” Not giving into the blank stare he received from his baffled student, the teacher repeated, “Look—bad Buddhist.” Boydo-Sensei explained to my class that the monk was not eating his orange in a mindful way. How could he focus on the flavor and the experience of eating the orange while he was preoccupied with the newspaper and what the headlines said and getting his coffee mug to his lips without spilling the hot liquid all over his orange Monk-ish robes? He could not possibly be truly tasting the orange because he wasn’t absorbed in the present moment, enjoying the orange for what it was, and for that, he was a bad Buddhist.
As I left class, I asked myself, had I ever really tasted an orange before? Had I slowed down enough, with anything, to really experience it, embody it? Boydo-Sensei challenged my class to go into the dining room, illegally take fruit from it (as I had already done), and taste it—really taste it. He told us to put one section of the orange on our tongues and hold it there. Feel the texture, he said, feel the weight of it in your mouth. Bite into the fruit slowly, he said, see how juicy it becomes when the skin is pierced by your teeth. Nature created this, he said, this fruit that’s in your mouth that you usually chew without a second thought.
If someone had asked me how my orange tasted previous to this class/moment of enlightenment, I would have probably said something along the lines of, “uhhh good?” and moved on to the next bite, eager to get on with other activities. There was sunbathing to be done on Deck 7 and planning to be done for my upcoming arrival in Kobe—who had time to taste oranges?
After hearing Boydo-Sensei speak, though, I too wanted to be a good Buddhist. I sat down with my orange and now, I wanted to know what it tasted like. It tasted like orange, yes, but it became more than that. When I looked closely at the peeled sections, I couldn’t get over the beauty of the orange itself, the intimacy of peeling back the saturated skin and biting into it, spitting out the seeds and discarding the white, stringy pieces of peel still attached. At this moment, I felt, Boydo-Sensei’s teacher would have been proud. “Good Buddhist,” he would say. Good Buddhist. 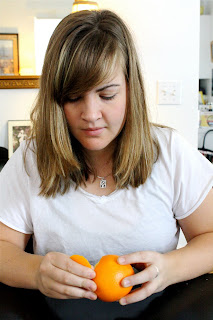 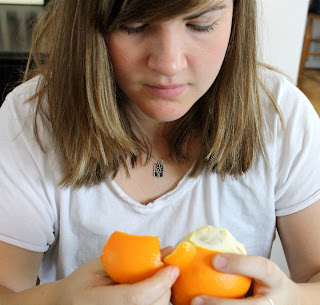 Posted by Natalia Singer at 3:18 AM

Email ThisBlogThis!Share to TwitterShare to FacebookShare to Pinterest
Labels: the sacred in everyday life

Natalia Singer
I'm an English professor and Francophile who writes fiction, memoir, and travel essays, and would live in a pen with several well-behaved dogs if I needed to, or if there was money in it.

Zoe waiting for something to happen.